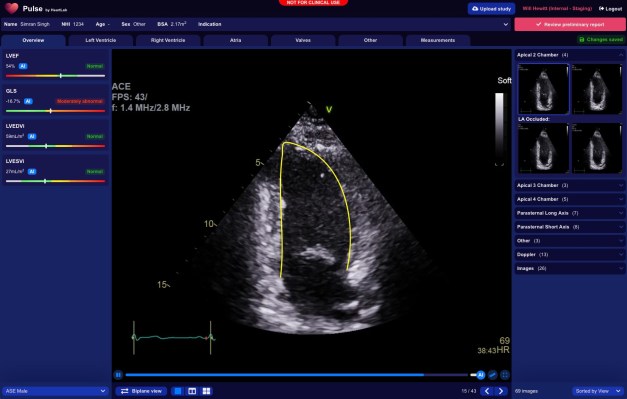 New Zealand-based medical technology start-up HeartLab has raised $ 2.45 million in seed funding that it says will help the company expand its AI-based cardiac scanning and reporting platform to cardiologists in the United States by early next year.

HeartLab provides an end-to-end solution for echocardiograms, the ultrasound tests that physicians use to examine a patient’s heart structure and function. Not only does the software help sort and analyze ultrasound images to help physicians diagnose cardiovascular disease, it also streamlines workflow by generating patient reports for physicians which can then be added to the health record of the physician. ‘a patient.

Will Hewitt, 21, started HeartLab at the age of 18, studying applied mathematics and statistics at the University of Auckland and working as a researcher at the Auckland Bioengineering Institute. The idea for the startup came to him while listening to the cardiologist, and now co-founder, Patrick Gladding explain how long and potentially inaccurate it is for doctors to have to manually review several scans each day.

“You have a really repetitive manual task performed by a highly trained professional,” Hewitt told TechCrunch. “To start with, we just decided to train the AI ​​to do a very small part of the doctor’s job, which was to look at these scans and generate a few different measurements that the doctor would normally have to do himself,” Hewitt said. . .

In order to replicate the tedious process that physicians used to go through, HeartLab created its own in-house labeling tool with sonographers that includes step-by-step guides and prompts to collect data on a range of different measurements. Hewitt said this initiative was one of the most valuable engineering efforts the company has invested in to date, as it has led to cross-validation, which is used to test the ability of the machine learning model. predict new data, as well as report problems. such as selection bias and overfitting.

After HeartLab managed to replicate the digitization process, the company set about expanding its services in a way that relieved doctors of additional administrative burdens so they could spend more time actually treating their patients. Usually, doctors use one software tool that analyzes the images, another that views the models, and another that actually writes the report, Hewitt explains. HeartLab’s platform, called Pulse, can now condense these processes into one software.

Cardiologists and sonographers at four different sites in New Zealand are currently testing technology from HeartLab, which is also awaiting regulatory approval from the U.S. Food and Drug Administration. HeartLab expects Pulse to be approved by the FDA by the first quarter of 2022, when the startup can begin selling the SaaS product.

“To begin with, we want to talk to small to medium-sized clinics in the United States,” Hewitt said. “We have found that our products are the most popular in these clinics because they replace more software than in a larger clinic. In a larger clinic, some of this software that they had to buy already, compared to a smaller clinic, these are things that they couldn’t access anyway. So when we get to the US, we want to start shipping primarily to these types of users as we work on how best to present our value proposition to the larger clinics. “

Hewitt says the funds from this round will also help the startup hire 10 more staff to join the existing Auckland-based 13-member team. Having more technological talent on board will help HeartLab advance its product offering. Right now, Pulse is at the point where he sees so many scans and takes so many steps that he can go through the process faster than a doctor could do on his own and in fact spot patterns than a doctor would not see, according to Hewitt. The next step, which a lot of the seed funding goes to, is how to diagnose the disease rather than just being able to point it out.

“How can we actually deliver something that doctors would normally order another scan for?” Hewitt said. “One of the key ideas of AI is that you can create mappings from low-resolution images like ultrasound. How can we try to learn a pattern from an ultrasound that’s similar to what you might see from an MRI, for example? “

If HeartLab can figure out how to glean advanced information from an echocardiogram instead of an MRI, it would save hospitals, clinics and patients a lot of money. Each cardiac MRI can cost around $ 1,000 to $ 5,000, which is about five times the price of an echocardiogram.

“I would say the biggest challenge for us is how to go from a company that can currently deliver products to a few local clinics successfully, to creating a product that evolves and provides a very good experience for many users. and different hospitals? Hewitt said.

Advances in early diagnostics and imaging technologies like HeartLabs are driving increased demand for such tools. As a result, the world AI-Based Medical Imaging Solutions Market Expected To Reach $ 4.7 Billion By 2027. By expanding its reach to the United States, where heart disease is the leading cause of death, HeartLab is poised to take a big slice of this pie.

In total, HeartLab has publicly raised approximately $ 3.2 million in funding, which includes a pre-seeding last October of approximately $ 800,000 led by Icehouse Ventures with backing from Founders Fund, the San Francisco-based venture capital firm that led the round, announced Thursday. Icehouse Ventures also contributed to the oversubscribed round, with another New Zealand firm Outset Ventures and private investor and Figma design platform CEO Dylan Field.

“The use of AI in medicine reduces pressures on healthcare systems and ultimately saves lives,” said Scott Nolan, Founders Fund partner, who has led investment cycles for three. other New Zealand startups, in a statement. “The HeartLab team has built a truly compelling AI-powered platform that physicians love to use.”

The centrally managed IT labs are open